B3X is the utility token of the neobank Bnext which objective is to support the expansion and growth of the company to achieve the goal of leading the fintech sector in Spanish-speaking countries.

The Bnext utility token is developed following the ASA standard of tokens issued on the Algorand blockchain. By so doing, B3X takes advantage of the functionalities of an efficient network, with fast, low-cost transactions and clean carbon emissions.

During the IEO phase, the company's tokens were valued between €0.015-0.02 and 25% of the total B3X Token supply of 3.5 billion tokens was offered through the Bit2Me Launchpad. At the beginning of November 2021, Bnext offered 10% of B3X to private investors, raising 5 million euros. In 2019, it closed the largest Series A of a fintech in Spain, raising 22.5 million euros and reaching more than 300,000 active accounts. It also raised €3 million in a crowdfunding campaign for its customer community, which broke the previous record by raising €1M in 1 hour.

Advantages of the token

Participate by voting to decide what the next steps of the Bnext roadmap will be like and what the new features of the platform will be, it helps to generate value for all Bnext clients.

Be among the first to try new products that are launched by Bnext. The more tokens you have, the more chances you have to get preferred access.

Get an extended guarantee when you buy with your Bnext card and always keep all your payments safe.

Get discounts of up to 90% on the margin obtained by Bnext in the international transfer system on blockchain.

Increase the cashback you receive for paying with your Bnext card by up to x2.

Get extra rebates on some of the exclusive brands you have available in the Rewards section of Bnext.

Use your B3X tokens to buy products from Bnext partners in their marketplace and obtain different benefits and discounts.

Earn B3X tokens by inviting your friends to use Bnext.

Coming soon, you will be able to receive an exclusive Bnext metal card just for buying and holding B3X tokens.

In the future, if you use your B3X tokens to pay for Bnext products or services, you will get exclusive discounts and benefits.

Coming soon, if you activate the automatic rounding up of B3X, you will be able to save on all your purchases with B3X.

As a holder of the B3X token, you will get exclusive access to Bnext's new DeFi products, where you can get the most out of your cryptos (Coming Soon).

Do you want to get the most out of your B3X tokens? In the future, you will be able to put your B3X tokens into Earn and receive rewards without having to do anything.

Supply, distribution and management of tokens 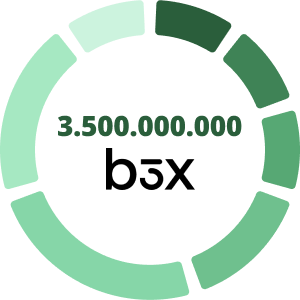 Speaking of the B3X token

Register with Bit2Me and verify your account to access Bit2Me Launchpad and participate in this and other tokens selected by the Bit2Me team.

Participate in the presale

Select the number of tokens you want to reserve in each phase quickly and easily.
The more B2M tokens you have, the better your position will be!

On the day of departure, make sure you have in your wallet the amount of euros you want to participate with, just a few steps to be in!

Choose your language and region